The Black Widow by Daniel Silva 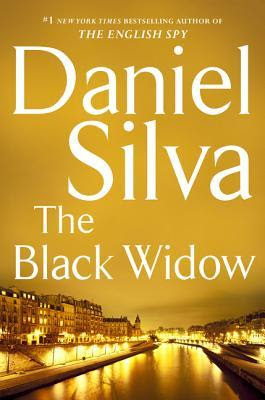 When our key operative in secret Israeli-intelligence, Gabriel Allon, was first introduced by bestselling author Daniel Silva in The Kill Artist in 2004, I never expected the protagonist to outlast his contemporaries. He easily did that and not only outlived them but is getting toug her and better. In the space of just twelve years, Daniel Silva churned out Gabriel Allon thrillers at a frenetic pace, taking the total to sixteen exciting novels – one every nine months - leaving the readers breathless with the pleasure of reading and anticipation. With each new installment, Gabriel Allon is growing stronger and there’s no stopping him. The latest - The Black Widow - the sixteenth in the Gabriel Allon series is one of the best thrillers I have read in recent months.

The Black Widow by Daniel Silva takes the series to a new level as Gabriel Allon stands at a crossroad. He is no longer the same person. With the cycle of life catching up on him, he is happily married to Chiara, who recently gave birth to twins - Raphael, and Irene - he seems the average normal husband-dad next door. His field days are almost and he is set to take over as the new director in the Office. But when massive bombings ripped through a Jewish neighborhood in Paris, he is called upon to render field service one more time. With the same steely determination and strength, one is transported to Paris, Jerusalem, England, and the United States and back again as Gabriel Allon planned and executed a manhunt for the perpetrators. As the setting crisscrossed cities, countries and continents, Daniel Silva raised the tempo with each unfolding scene, taking the reader on a thrill ride that never relents. Several new characters are also introduced. Gabriel Allon recruited a young female called Natalie Mizrahi to infiltrate the ISIS network. While the bad guys play a crucial role in much of Silva’s novels, The Black Widow has a villain who’s a class apart from the rest, a character that many readers will love to hate.

I’m a huge fan of author Daniel Silva and his fictional character Gabriel Allon. I have read all the books in the series. While some of them are truly outstanding, there have been some mediocre ones as well, though their capacity to entertain remained. Yet, of all the books in the series, The Black Widow is definitely the best. The characters are as formidable as ever. The plot is mounted on a lavish scale and author Daniel Silva’s writing is as sharp as ever, if not better. What makes the book so special is not just the twists and turns and the suspense and thrills but the refinement with which the story is told. There are no grey areas to doubt the authenticity of his description and setting. Marked by political trickery and driven by his passion to avenge, there is no dull moment reading The Black Widow by Daniel Silva.
Posted by Sojourner at 3:47 AM