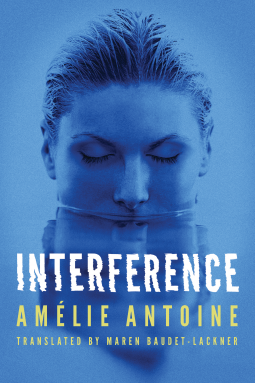 When I make a decision to read a novel, obviously there are several factors involved. One that immediately draws my attention is the cover. A stunning cover with an equally interesting blurb normally seals the matter for me. And then there is the authorship matter. It is a bit natural to reread an author whose work I previously read. In this case, I decided to settle for Interference by Amélie Antoine on the basis of the book's stunning cover. I was amply rewarded as the novel has been translated from the original French language into flawless English by Maren Baudet-Lackner, and the struggle with the narrative normally associated with translated work was not there.

The story follows two seemingly happy couple Gabriel and Chloé who are in the prime of their lives. Married for eight years now, they are living in Saint-Malo when one fine day Chloé is drowned in a small bay while taking her usual dip before work. A distraught Gabriel met Emma, a young photographer, when he joined a support group. Emma also proposes to make a scrapbook for each of the deceased. The two are drawn to each other but Chloé still seems very much alive and Gabriel cannot forget her and as a result is unable to rebuild his life. And it is on this premise that the author effortlessly pulls along the reader through to the end of the story with as much sense of trepidation and excitement. What was the young widower clinging to? What really happened to Chloé? And what part has Emma to play in the lives of the young couple, and later on in the life of Gabriel?

Things are not what they seemed to be is a cliché normally used in describing such a situation. In Interference by Amélie Antoine, the cliché means much more than just that sense of platitude. While most thrillers and mystery novels are full of twists and turns, this was much more than that. In fact, Interference by Amélie Antoine is a psychological thriller with nail-biting suspense and twists that will leave you gasping for breath. Surprises and new developments are splattered liberally. Uniquely original in concept and execution, the author narrates the story through the three distinct voices of its main characters in each chapter which make the story much clearer. I love the way the story was paced and never expected the kind of ending the author conceived. Amélie Antoine not only brilliantly handled the characters and their role within the story, but also loves to play with the reader’s nerves and knows how to pull off a stunning climax that will leave you speechless.

AMAZON REVIEW LINK
Posted by Sojourner at 11:32 AM