Two By Two by Nicholas Sparks 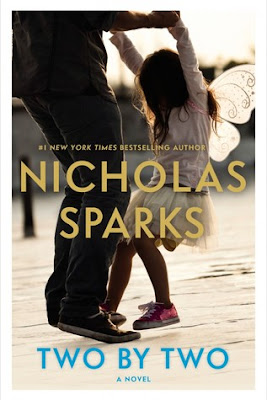 I’d survived the year because I’d been able to march two by two with those I loved the most….

Two by Two by Nicholas Sparks is a deeply moving story that tells of the happiness, struggles, heartbreaks, and triumph of the narrator from the year after his marriage up to a certain point in his life when it all unraveled. It is a story of love, hurt, family, courage and healing. It is a story that will make you laugh and cry with the narrator, advertising executive Russell Green, who hadn’t given much thought about having a child when his wife Vivian broke the news. When London was born, Vivian quits her job to be a stay-at-home mom. When Russell quits his job to start his own business, Vivian decides to return to work, slowly but surely letting them drift apart. With his wife working, Russell took charge of London, showering her with his attention, affection and love. When the inevitable happened in his marriage, though not unexpected, Russell was shattered.

Nicholas Sparks’ Two by Two is a poignant though not an out of this world story. It is a story that is regrettably becoming a familiarity, at least some parts of it. Four different women played important roles in shaping Russell Green. Vivian, Emily, Marge and London. Vivian gave him a daughter, Marge stood by him to weather the storms during his most difficult days, Emily’s appearance almost seemed preordained and London, she was his everything. But to each of them he was a different person. He was a husband to Vivian, a brother to Marge, a suitor to Emily and a father to London. Through these characters and their stories, Nicholas Sparks explored the strength and frailty of human relationship, and the ties that bind two people together.

What I find interesting about the stories written by Nicholas Sparks is its freshness and originality both in concept and execution. If you pause for a moment and think of all the books that he has written, any serious follower of the author will quickly recognize the distinctiveness of each new book and that there’s usually a tectonic shift from the previous book every time a new one comes out. Though I was a tad disappointed with his previous outing See Me, Two by Two has reignited my faith in Nicholas Sparks as the king of love stories, and if the book is anything to go by, his reign will be long and memorable.
Posted by Sojourner at 1:01 AM