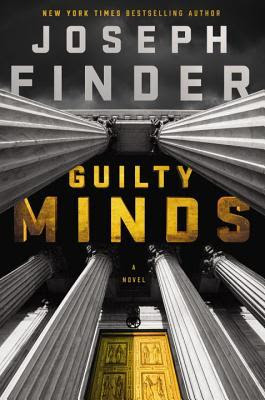 Guilty Minds by Joseph Finder is the third book in the Nick Heller thriller series which follows in the tradition of the first two books, Vanished (2009) and Buried Secrets (2011). Nick Heller is a private investigator who is skillful, doggedly tough and clever. He is no ordinary operative as he has experienced life as a member of the Special Forces in Iraq. His tenacious character allowed him to dig up secrets that the powerful and rich would pay anything to keep buried forever.

The story in Guilty Minds by Joseph Finder starts with Nick Heller meeting with a Washington legend Gideon Parnell in the office of Shays Abbott Burnham, one of the biggest law firms in the world. Nick soon learns from Gideon that a man of impeccable character, a man whose entire career rests on his moral authority, is about to become the subject of a scandalous gossip website, Slander Sheet. And the man who is in the thick of things is none other than the Chief Justice Jeremiah Claflin of the Supreme Court. Nick learns that unless certain conditions are fulfilled, the website will run a story that the Chief Justice of the Supreme Court had a regular relationship with an escort. On the surface, it looks like a simple case of blackmail but when the young and vivacious Kayla Pitts is found dead, things become very hot even for a quick operator like Nick Heller.

In Guilty Minds New York Times bestselling author Joseph Finder produces one of his finest thrillers to date, and perhaps the thriller of the season. Ingeniously plotted, furiously paced, written in the same style that has made him a book lover’s top-notch thriller writer, and twists and turns that will grab every reader, Guilty Minds is a fascinating read as Nick Heller race against time to dig up the truth and find who’s lying and why. Some of the characters and their stories within the story added flavor, especially the hotshot investigative reporter Mandy Seeger. I love the way the author prepares the reader for the climax and tie all the strings together and how the story was allowed to play out was simply incredible. All in all, this was an enjoyable and exciting read!
Posted by Sojourner at 12:46 AM