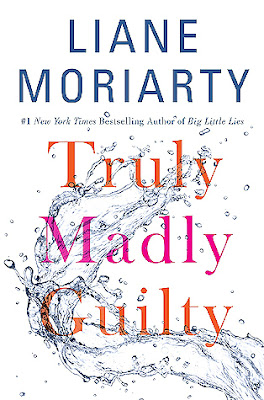 Australian author Liane Moriarty, who mesmerized and captivated readers worldwide with her brand of bestselling novels such as Big Little Lies, The Husband’s Secret, What Alice Forgot, Three Wishes, The Last Anniversary and The Hypnotist’s Love Story, returns for another outing with an eclectic cast of characters in Truly Madly Guilty, with a premise that definitely won’t knock you off your chair. But in the deft hands of the author and her sharp imagination, a simple barbecue that has gone wrong has the power to completely pull you in as she dissects its grave consequences through the characters and their disparate stories.

In Truly Madly Guilty by Liane Moriarty, one leisurely afternoon tea of two couples and two children turned into a barbecue in a backyard with three couples and three children. Accountants and childless couple Erika and Oliver invited their close friends, cellist Clementine and her husband Sam, and their two children Ruby (2) and Holly (5) over to their house. But when their rich electrician neighbor Vid in turn invited them over for a backyard barbecue, it turned into a party of three couples and three children as they were joined by Vid’s stunning trophy wife Tiffany and their ten-year-old daughter Dakota. And it is during the course of this unplanned barbecue that something dramatic took place, the focus of the plot on which hinges the rest of the story.

Author Liane Moriarty masterfully pulls you along to find out what really happened. Once you discovered it, she turns it into the focal point in building a story that examines the way we live our lives. While the story is emotionally gripping, some may argue that it is not as riveting as her earlier novels. But it has to be noted that Moriarty sticks to her formulaic structure which explores the hidden complexities of seemingly happy families which has won her many admirers. The story also delves deep into the relationship between Erika and Clementine since that fateful barbecue as the tension and secrets exploded in their faces while the author feverishly worked through their lives in a way only she can. In the end, Moriarty’s stories of modern day suburban life, set in and around Sydney, Australia is not just about a twisted barbecue. It is about friendship, marriage, family, parental remorse, and of course, the “what ifs…” of life!