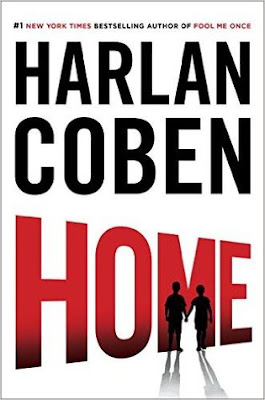 Myron Bolitar, an imperfect but tender-hearted sports agent and one of the most captivating and multifaceted fictional heroes, returns in a suspense-filled mystery thriller, Home. Coben brought to life this flawed but humane protagonist in his 1995 bestseller, Deal Breaker. After a long hiatus I’m extremely excited to read about the exploits of one of my favourite characters, though not with guns blazing, but with an ever-twisting storyline and the right mix of humor, romance, drama, intrigue, action and mystery. This eleventh book in the Myron Bolitar series, Home by bestselling author Harlan Coben, is one entertaining read which will keep you in suspense from beginning to end.

When Windsor Horne Lockwood III (Win) received a mysterious untraceable email concerning two boys, Patrick Moore and Rhys Baldwin, who have been kidnapped from Baldwin’s suburban New Jersey house ten years earlier when they were six, he comes out of hiding to follow up on the lead provided. It led him to London’s King’s Cross Station, where he spotted someone who resembles Patrick but it soon becomes messy, and he calls up Myron Bolitar for help. To cut a long story short, Myron and Win soon found Patrick again, and brings him home but Rhys was nowhere to be found. Their hope of ferreting out details about Rhys was short-lived as they are unable to get anything out of Patrick. Their hope of finding Rhys dimmed but the duo rummaged through the smallest leads in the fondest hope of rescuing Rhys. Myron and Win returned to where it all started, trying to piece together the jigsaw puzzle, and unearthed new leads and evidences as they try to solve the mystery.

Home by Harlan Coben is full of the author’s trademark twists and turns, fast-paced, absorbing, fun and exciting. The two main characters perfectly jell, and they are ably supported by secondary characters like, Mickey Bolitar, Ema Wyatt, Esperenza, Big Cindy and Spoon. I find them exciting and believable. The master storyteller that he is, Coben has a way of tying you up in knots until the last page. His sense of humor shines through his characters, especially Myron. Though I was a little sceptical about Win sharing almost the same space and of equal importance as Myron in the book, in the end it has worked perfectly for me. While the story revolves around two kidnapped boys and the efforts to trace and rescue them, it has a deeper emotional, psychological and social issues ingrained in it – about friendship and family.

AMAZON LINK
Posted by Sojourner at 3:28 AM