The Wonder by Emma Donoghue 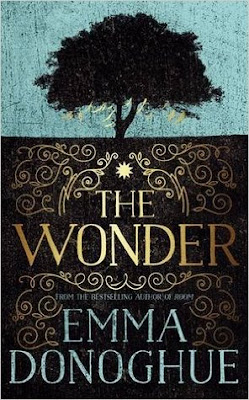 Author Emma Donoghue is no stranger to aficionados of a tight and taut read. Her 2010 release - Room - was not only a New York Times Best Book of 2010 but was also a finalist for the Man Booker, Commonwealth, and Orange Prizes. In the tone and tenor of that blockbuster of a book, Donoghue returns with a historical novel with a premise which is equally interesting and extremely atmospheric, if not more. It is a story riddled with secrets, superstitions, faith, rituals, myth and tradition. The Wonder by bestselling author Emma Donoghue is a psychologically powerful and gripping novel which fans of the author will enormously relish.

The Wonder by Emma Donoghue is the unforgettable story of an eleven-year-old Anna O'Donnell who lives in the small Irish village of Athlone. Set in 1859, Anna is no ordinary girl as she has lived without food for months, claiming she is surviving on “manna from heaven.” There are reasons to believe her claim as she showed no sign of fatigue or health problems. When the news about the “extraordinary wonder” spread, curious people from all over the world flocked to this tiny village nestled in the middle of Ireland. For the people of the small village, the case of the miracle-girl took centre stage and a committee is hurriedly formed to determine the veracity of Anna’s claims. Libby Wright, a nurse trained by Florence Nightingale and a veteran of the Crimean campaign, who was living in London, arrived in the hungry season of the year to find herself housed in a small, windowless room. She was hired to watch over Anna, not to nurse her but to keep vigil and observe her for two weeks, to see if the claims are true. And in due time, a verdict will be pronounced if it is a hoax or a miracle. Tension mounts with the tick-tock of the clock.

Emma Donoghue pulls off a major coup by brilliantly probing the hearts of readers with searching questions as the story reaches its climax. The relationship between Anna and Libby is also explored intricately as their attitude towards each other changed. Lib was initially suspicious of Anna and was determined to expose her. Lib’s relationship with the newspaper reporter, Irish Times correspondent William Byrne, added the much-needed romantic flavor to the story. While The Wonder is not opulently mounted, its searing intensity and scope in its examination of the human psyche will leave the reader breathless. Quite often, things are not what they seemed to be. It is impossible to close the book without questioning how far one should go when it comes to matter of faith and belief. If you enjoyed Room, it will be difficult not to like The Wonder.